Labor Day weekend in Middle Georgia brought nearly perfect weather.  Although a hurricane traveled up the eastern seaboard, high pressure dominated the Eastern half of the United States bringing with it lower temperatures, lower humidity, and clear blue skies.   I wanted another flight before the weather systems changed again, so we decided to make a short flight to Little Ocmulgee State Park near McRae, Georgia for lunch on Labor Day Monday.  Wheeler-Telfair County Airport (MQW) is across the highway from Little Ocmulgee.  I had been to MQW once previously, with my instructor a week or two before my check ride.  Since then the runway has been extended from 3400 feet to 5000 feet and completely resurfaced.  Very nice improvements.

Our flight nearly wasn't.  I fly from the Robins' Aero Club.  Several aircraft and probably 100 members.  Members "dispatch" aircraft using a computer system set up to schedule aircraft and insure the member renting the aircraft is "current" in the Aero Club system.  Aero Club currency is based on a number of factors and one factor of mine had expired.  So, on August 31, I was "current", today I was not.  The computer system would not allow me to dispatch my aircraft.  Without a dispatch slip, I could not legally depart with the aircraft.  While waiting for an instructor to return from a training flight, a second instructor happened by who accepted my paperwork and update the computer system.  We were now on our way. 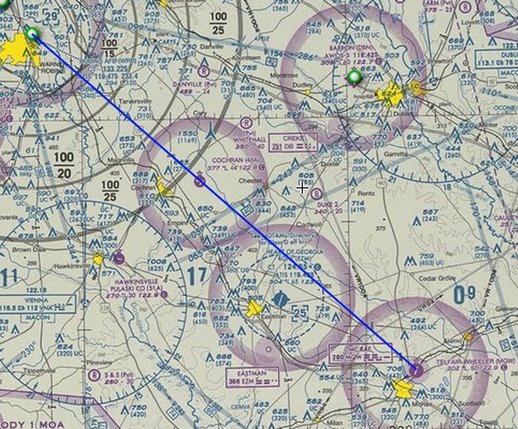 Our path of flight would take us directly over Cochran, GA and Cochran Field (48A), then just East of Eastman, Ga and the Heart of Georgia Regional Airport (EMZ).  (Blue line is our planned flight path). 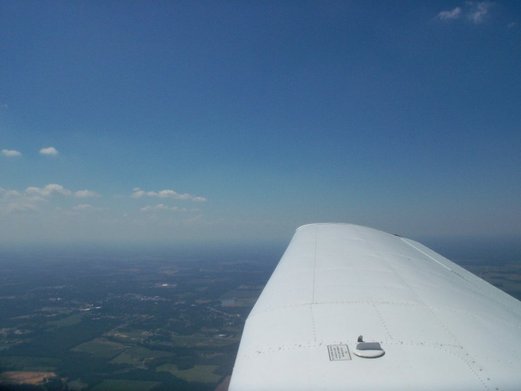 Winds were as forecast, variable at 5 knots.  To the South, clouds were forecast to be scattered at 5000 feet.  We departed Robins AFB under clear skies, but just a few mile south of Robins, clouds began to appear. 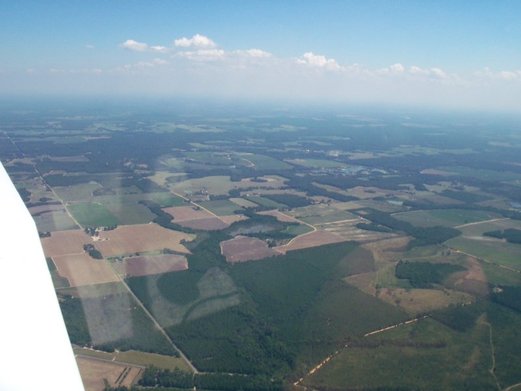 As we continued South enjoying the beautiful views of the countryside passing below, we continued to see clouds building above us.  (Sorry about the reflections in some of these pictures). 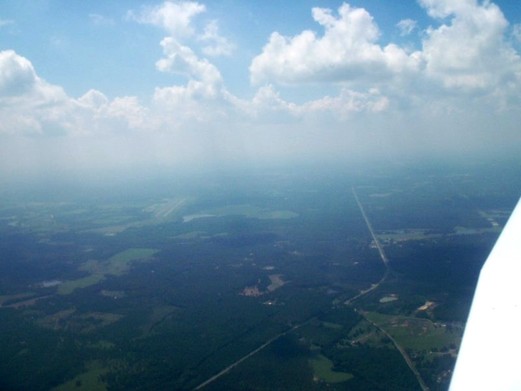 By the time we reached Eastman, the clouds were scattered but significantly heavier, and the hazy had completely obscured the horizon.  Along with the clouds came thermal activity, making a pretty bumpy ride (both ways).   In the picture below, we are passing just east of Eastman, Ga.  The Heart of Georgia Regional Airport is seen in the left center of the frame, 4 miles to our west. 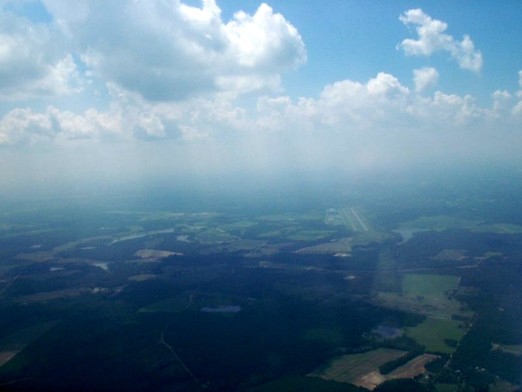 Another picture of the Heart of Georgia Regional.  In this frame, the airport is middle right. 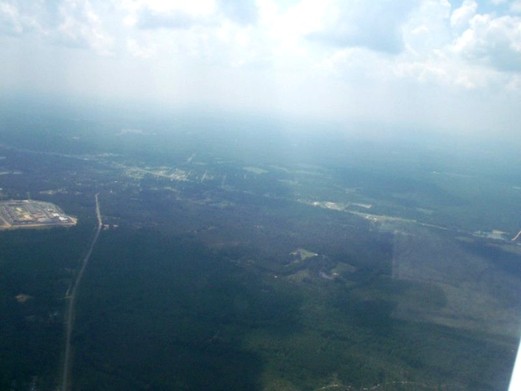 The city of McRae, Ga as we approached MQW from the Northwest.  Very hazy day here. 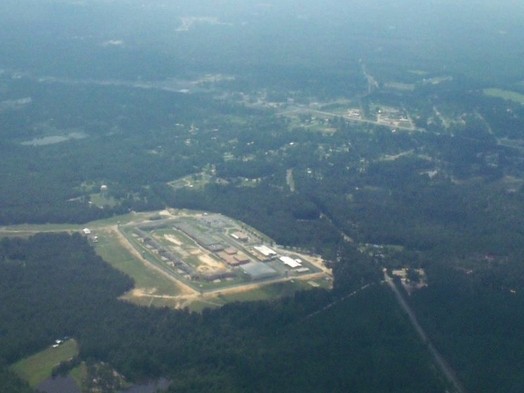 Setting up to enter the pattern at MQW, we noticed this complex of buildings.  Turns out the be the McRae Correctional Facility, part of the Georgia prison system.  Part of the city of McRae is shown near the top of the frame. 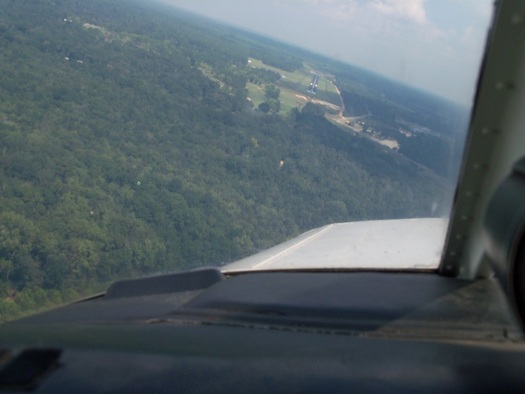 Turning final on approach to Runway 3 at McRae.  As I continued the approach, I was high and elected to "go-around" and make a second approach. 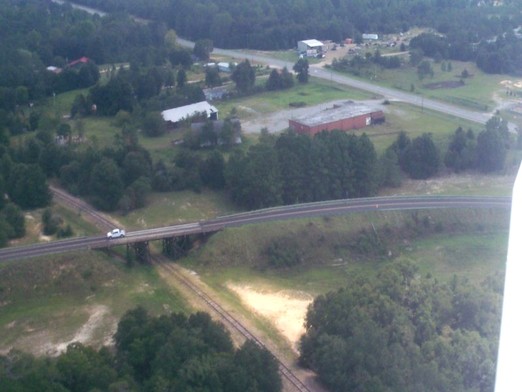 This must be an old highway bridge, looks like wooden bridgework.  This bridge is adjacent to the airport as viewed from the pattern. 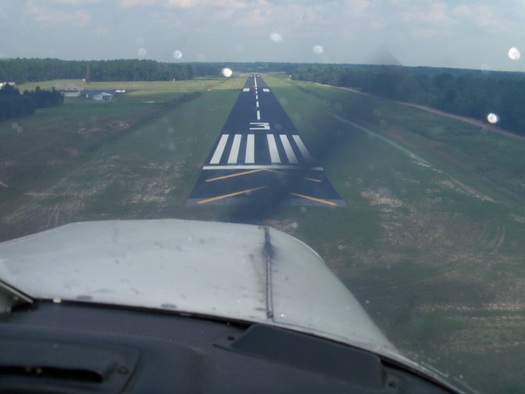 This is the second approach to Runway 3, much better the second time around. 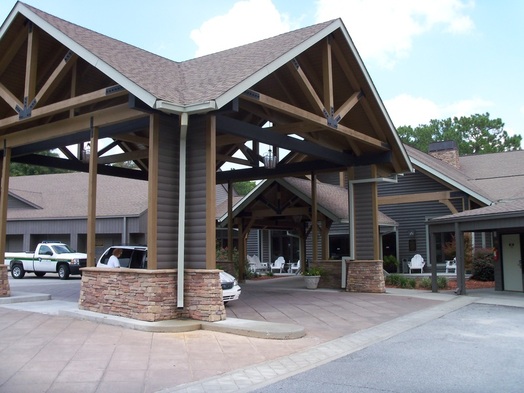 We called the Lodge at Little Ocmulgee for a ride from the airport to the lodge.  The lodge has a buffet style restaurant that serves breakfast, lunch, and dinner.  Good food and reasonably priced. 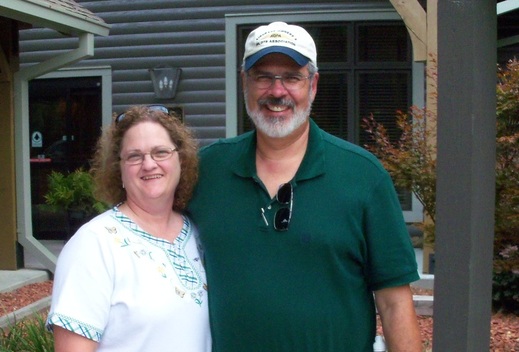 After our lunch and cooling off in the lodge, we were ready to return to the airport for our flight home.  The park ranger who drove us to and from the park offered to take our picture in front of the lodge.   Not sure why I was grinning so much - probably the fact I had just eaten, and the anticipation of another flight! 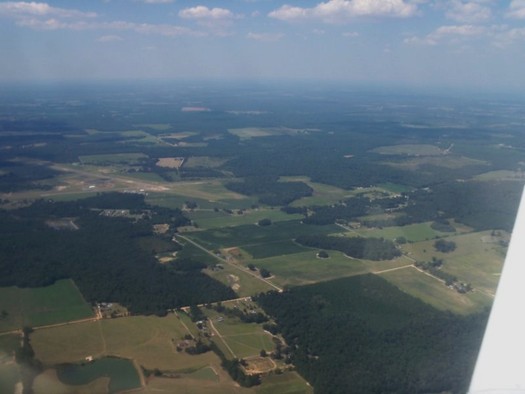 Cochran Field to our right on the ride home.  The runways are left side of the frame.  Notice as we traveled back to the North, the clouds were dissipating and blue skies were reappearing. 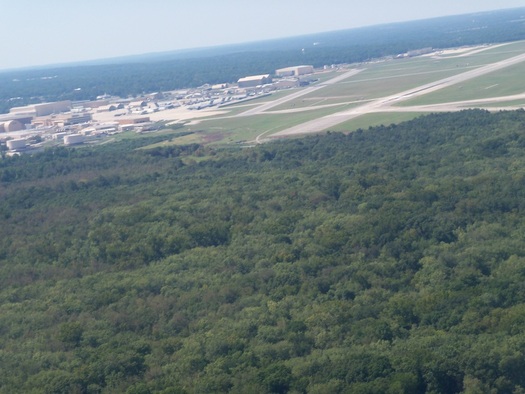