Although I would love to fly every day, this year I have managed to fly about once every three weeks.  It is not good to stay on the ground for extended periods.  Proficiency requires practice, so this morning I will practice.

The Robins AFB control tower is a training tower.  Calling ground control this morning for my taxi and departure clearance, the young voice that responded lacked the confidence and authority I am accustom to hearing from ATC.  Once cleared, having taxied and performed my ground check, I was cleared to contact the tower for take-off clearance.  The same young voice responded to my tower call and provided my take-off clearance.  In the background I could hear the seasoned voice of another controller coaching him through my clearance.  Someone else is getting practice today.

I departed Robins at 0820L and flew southwest to the local practice area.  While practicing tight turns, I monitored the CTAF frequency at Perry (PXE).  It was dead quiet so I headed there to shoot a few touch-and-go landings.

Winds were calm so I had my choice of runway and decided on 18 as I could enter the Downwind leg directly from the east side of the airport.  About five miles out, a Bonanza rolled out the taxiway to the run up area for 36.  To facilitate the Bonanza's take off, I elected to cross the field and enter the downwind for 36.  This allowed the Bonanza to depart without waiting for me to loose altitude and negotiate the pattern.  He departed as I entered the downwind leg.  The negotiation with the Bonanza went well.  Nicely done.

On final for my first approach I was high and fast.  About 300 ft AGL I decided to go around rather than force it down.  More practice, nicely done.

Turning left downwind for runway 36 a second time, I caught a glint of light off to my left (toward the runway).  I looked again and to my suprise, there was an airplane departing runway 36 - where did he come form?  It appeared to be a Citabria.  I made four more circuits of the pattern and never heard a radio call from this mystery aircraft.   My assumption is he was operating with no radio - perfectly legal.  An aircraft operating without a radio is referred to as a NORDO aircraft.  I kept a constant visual on him as he continued to follow me around each circuit of the pattern.  The Citabria was a bit slower than me, but made up for it by flying a shorter (tighter) pattern.  It was a bit disconcerting to turn Base leg, look left, and see an airplane a mile away headed straight at me.  My speed being higher, I turned final before he made mid field, but it was disconcerting none-the-less.

I cleared the Perry Airspace and headed south, pulling the Warrior into slow flight.  traveling at 55 to 60 knots.  Slow flight seems like you are going nowhere, but it polishes skills used in take-off and landing when flying the aircraft at low airspeed.  Aircraft are designed for speed and the controls are optimized for speed.  Aircraft control is quite differently at low airspeed.  I try to practice slow flight often.  After 10 minutes and a few turns, I let the Warrior accelerate to 105 knots and headed toward Lake Blacksheer. 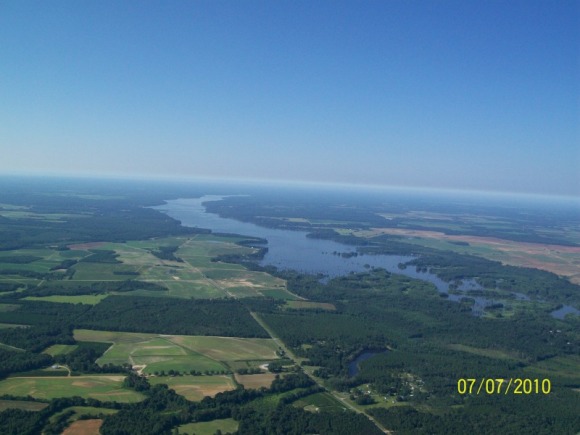 Approaching Lake Blacksheer from the Northeast at 2500 feet. 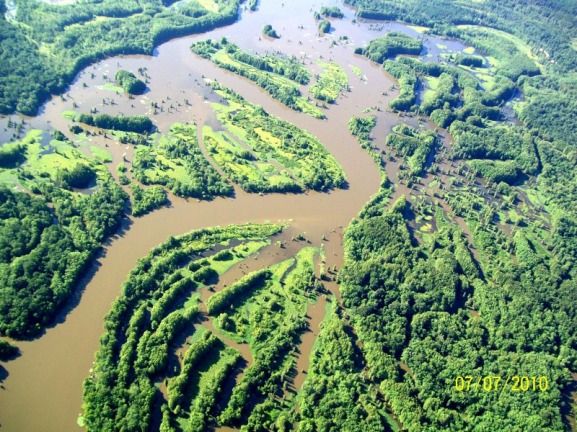 The head waters of Blacksheer is a swampy marshland where the Flint River cuts many paths through the trees and vegetation. 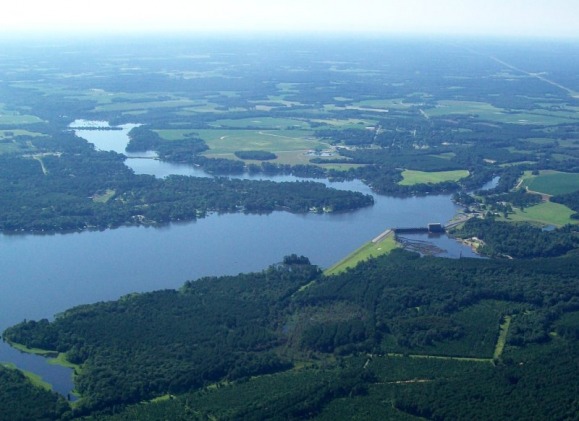 The dam at the South end of Blacksheer.  Georgia Highway 300 is in the background. 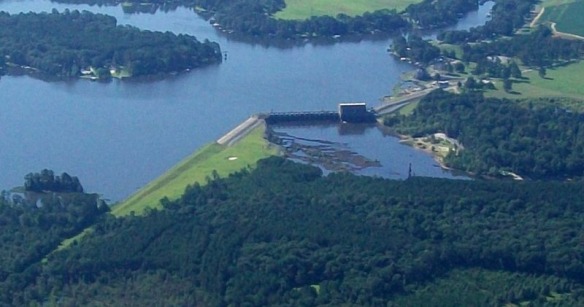 The Blacksheer Dam close up.
So my practice day included receiving clearances from a newly minted controller, tight turns, negotiating with several other aircraft at a pilot controlled airfield, sharing the pattern with a NORDO aircraft, slow flight, cross-country practice making the 45 mile trip to Blacksheer and back.  It was a beautiful day to be flying.