On a business trip to Portland, Oregon, I had a few hours free that I used to tour the Evergreen Museum.  This was my second trip to Evergreen, but the first trip with camera.  The Evergreen Museum began as the dream of Capt Michael King Smith, an USAF F-15 Pilot and son of Evergreen founder Delford Smith.  Capt Smith died in an Automobile accident in 1995.  A foundation was set up to continue Capt Smith's dream of an educational Aviation and Space museum in Oregon.

The museum is relatively new - all buildings are modern and the exhibits are exceptional.  Although the museum has a variety of air and space craft, perhaps its most notable achievement is the acquisition of Howard Hughes' "Spruce Goose".  This behemoth aircraft is housed in the main aircraft building and dwarfs all the other exhibits.   Due to its size, the "Goose" is difficult to photograph with a point-and-shoot camera.  I was able to capture elements of the "Goose" while photographing other exhibits and I will try to point those out in the photos that follow. 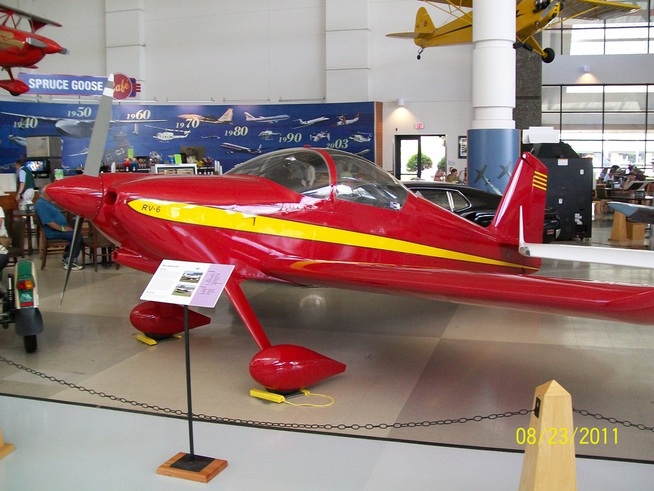 One of the first exhibits you meet is a Van's Aircraft RV-6. This RV-6 is serial number 0001, donated to the museum by Van himself. 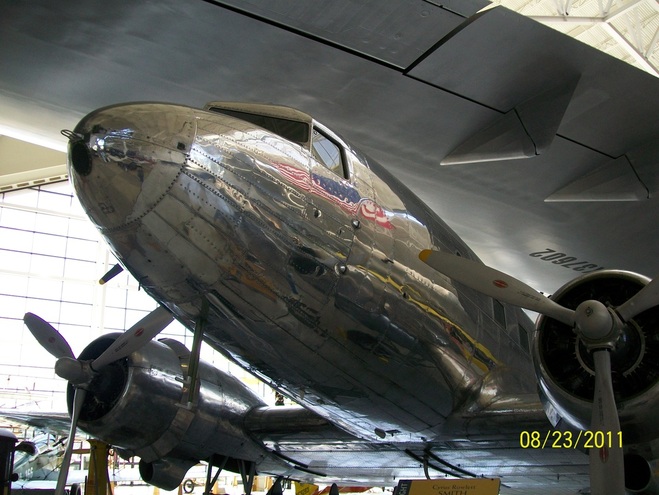 This DC-3 is the second oldest remaining of the type. It is also the first DC-3 to have supercharged Pratt-Whitney engines. Note the port wing of the "Spruce Goose" high above the DC-3. 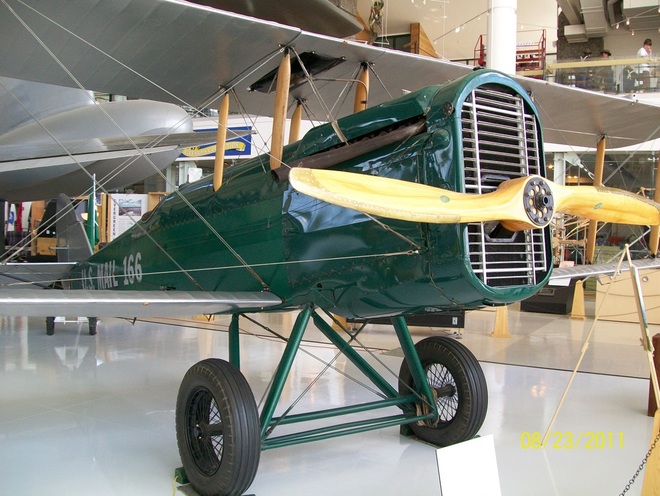 A 1918 de Havilland DH-4M. This is the last of the type known to exist of 4846 originally built. This aircraft remains airworthy. Note the "Spruce Goose" port wing-float just above the tail surface. 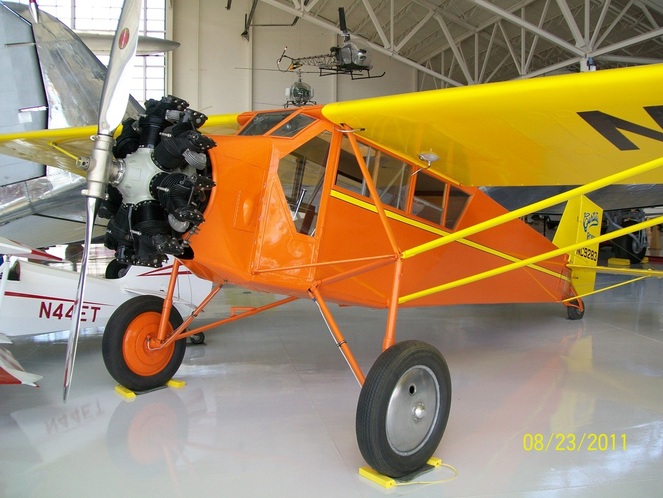 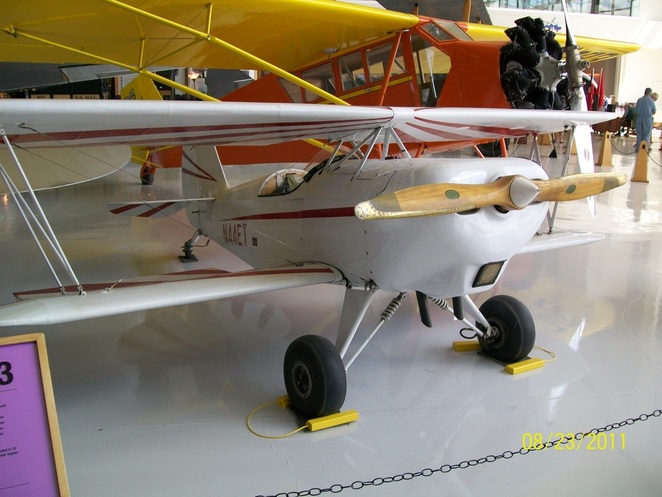 This Baby Great Lakes was hand built from plans over a period of 27 years. The aircraft made a single flight and was then donated to the museum. 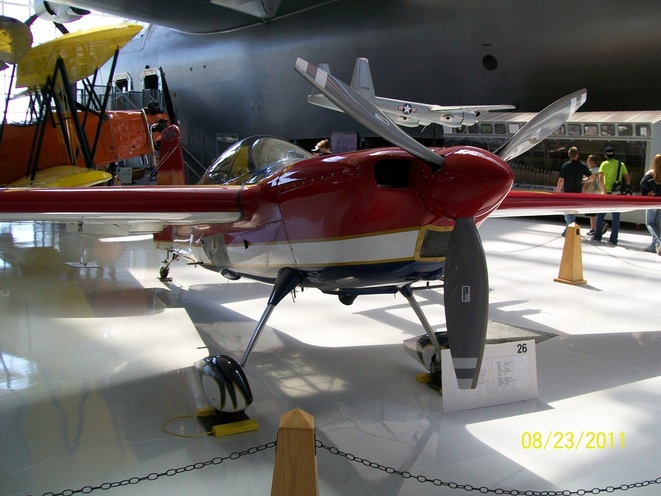 The Handley Raven - designed and built for airshow performance by Wayne Handley. Very "Extra 300" looking. Note the port side fuselage of the "Spruce Goose" in the background. 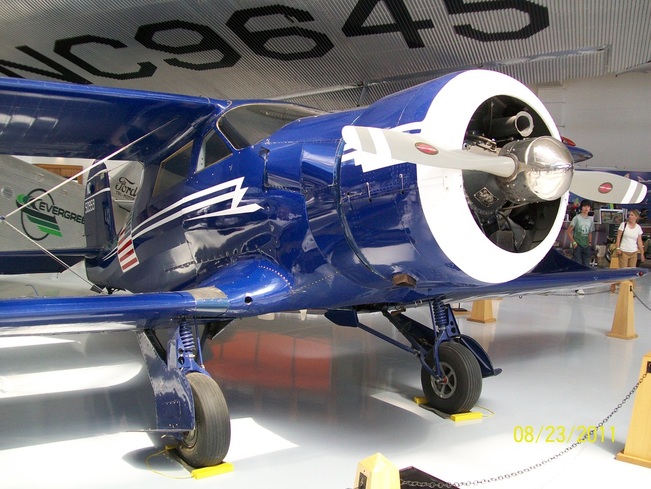 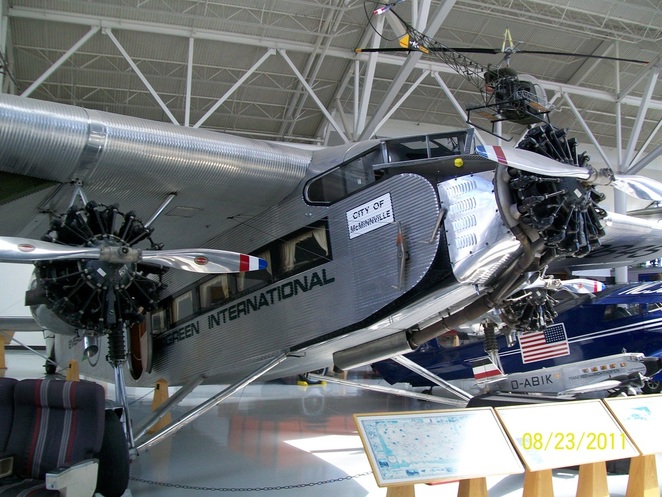 1928 Ford Tri-motor Serial Number 0008. Note the control cables running to the control surfaces on the outside of the fuselage. 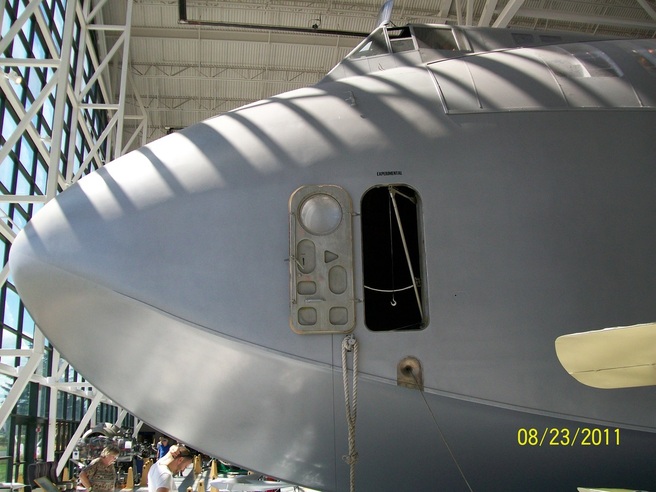 The nose and forward crew hatch on the "Spruce Goose". Note the word "EXPERIMENTAL" above the hatch. Although completed to point it made a single flight, Howard Hughes never sought certification for the aircraft, therefore "EXPERIMENTAL". 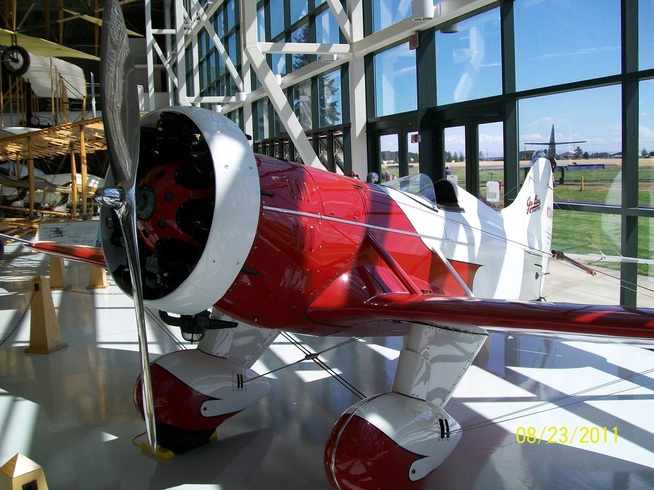 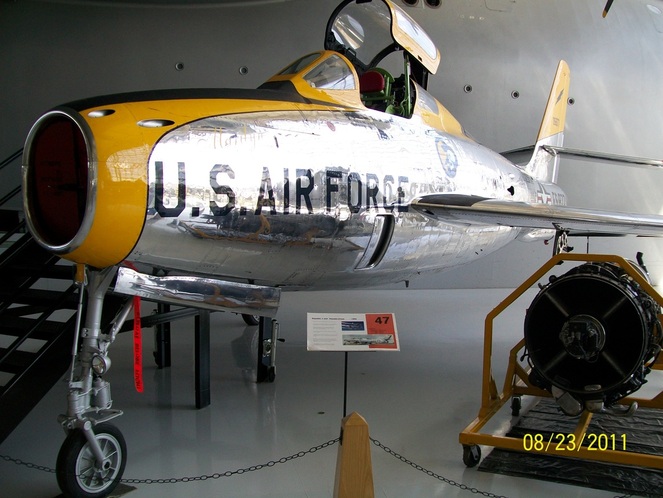 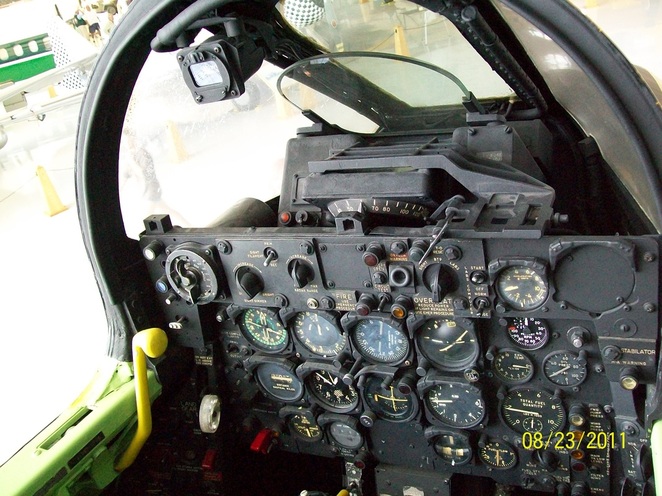 Republic F-84F and cockpit panel. Note the gray wall behind the F-84F? That is the starboard side of the "Spruce goose fuselage. 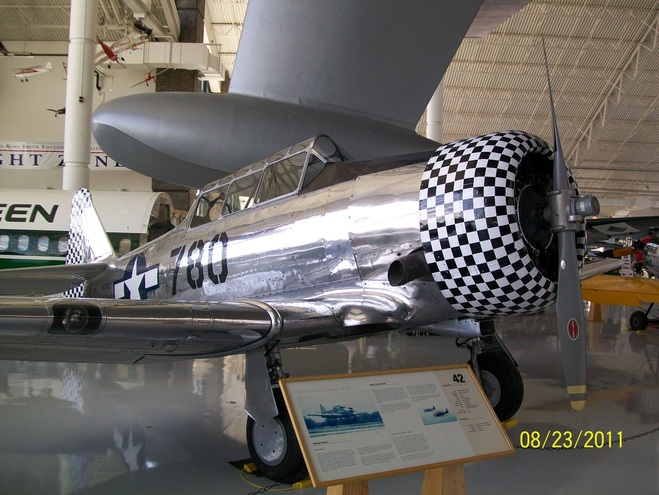 Navy SNJ-4 trainer. Upon retirement from the Navy, this SNJ-4 was sold to a scrap metal smelter, somehow it survived and has been meticulously restored. Note the "Spruce Goose" starboard wing-float above and behind the SNJ-4. 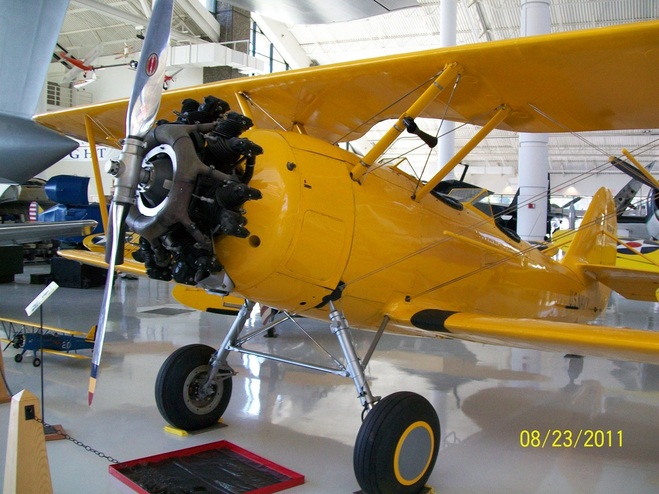 1935 Navy N3N-3 "Yellow Peril" These aircraft were built by the Navy, using leftover aluminum for the airships USS Akron and USS Macon. 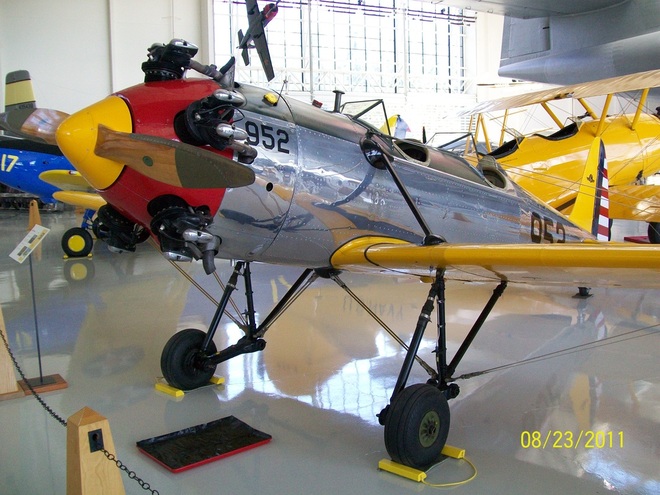 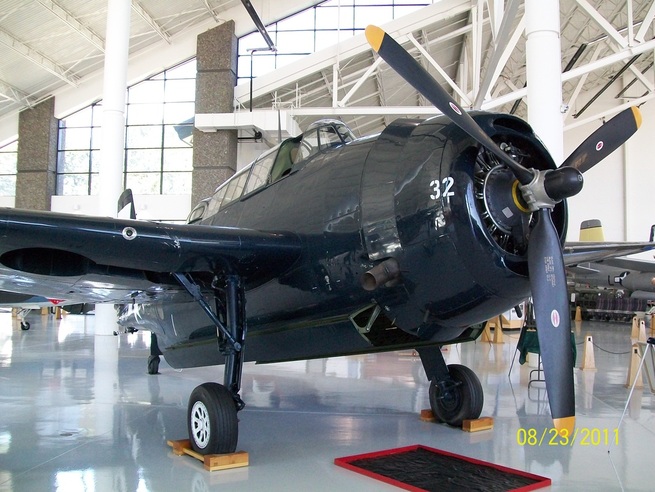 1945 Grumman TBM "Avenger". This is one large airplane. 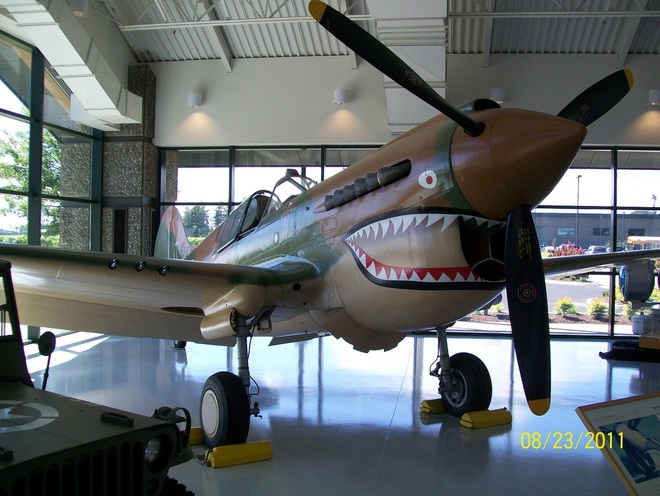 This P-40 suffered an engine failure on a mission in Alaska in 1944. A forced landing was made in a fresh water marsh. Found in 1975, the remarkably intact aircraft was retrieved and later restored to its present condition. It is magnificent in every detail. 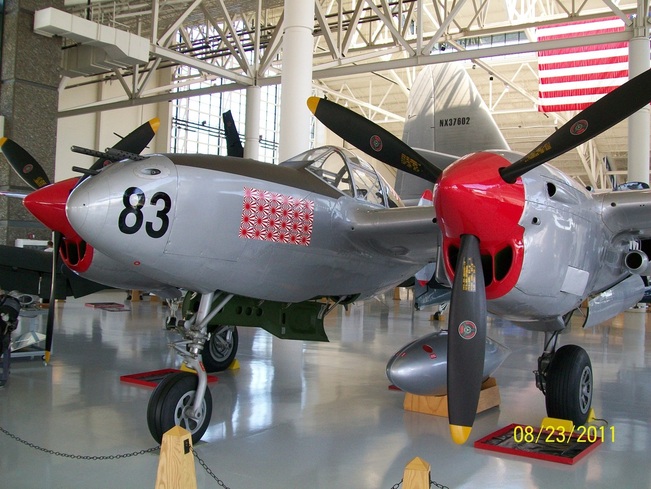 This P-38 "Lightning" was placed in surplus storage until 1947 when it was sold to a private company who used it for aerial mapping and surveying. In 1967 the aircraft was purchased by Harrahs' museum in Reno, NV where it was displayed until purchased and flown to England in 1987. Evergreen obtained the aircraft in 1989, and completed a ground up restoration. The aircraft is considered one of the finest remaining P-38 Lightnings in existence. Note the tail of the "Spruce Goose" reaching into the hanger rafters behind the P-38. 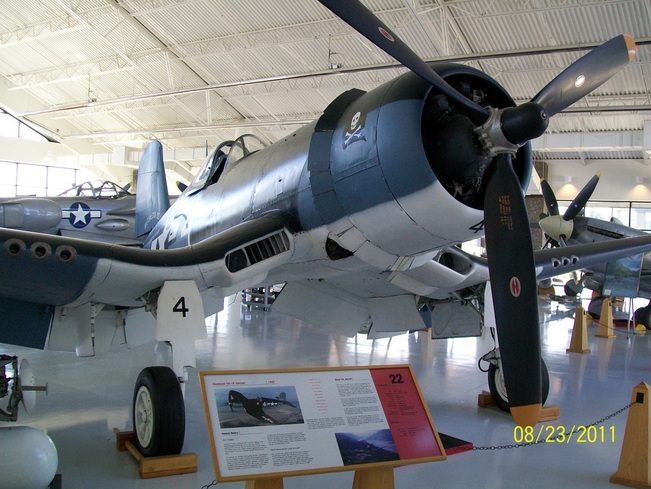 This 1945 Vought F4U Corsair saw life as a trainer until sold to the Air Force of El Salvador. It participated in the 1968 "Soccer War" between El Salvador and Honduras and apparently suffered a bullet strike in the wing (there is a patch covering a bullet hole). 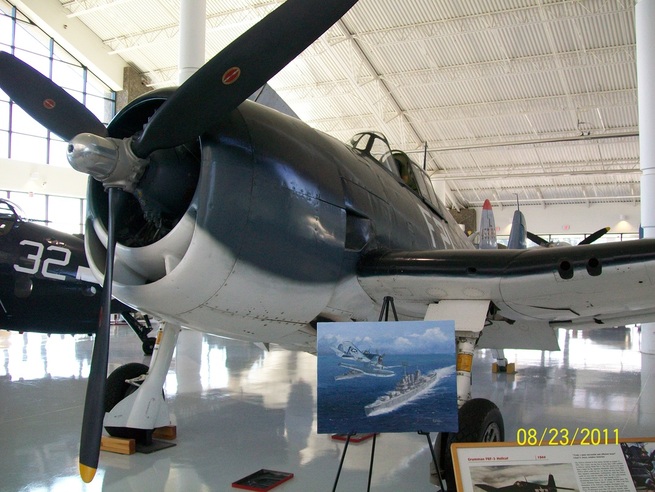 1944 Grumman F6F-3 Hellcat. This "Cat" belongs to the US Marine Corp who flew it as a WWII memorial until the 1970s when it was placed on display at Quantico, Va. It is still owned by the USMC and is on loan to Everygreen. 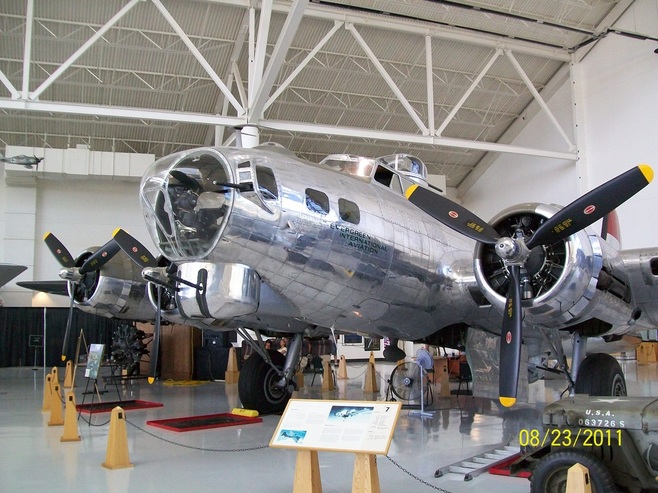 Evergreen's beautifully restored 1945 B-17 "Flying Fortress" was used by Evergreen as a fire fighter until its ground up restoration from 1987 through 1990. This B-17 was used to develop the "Sky hook" retrieval system which this aircraft demonstrated in the 1964 James Bond movie "Thunderball". It is also reported that a gun turret was found on display in a bar. To obtain the turret for the restoration, the bar was purchased, then sold after the turret was secured. 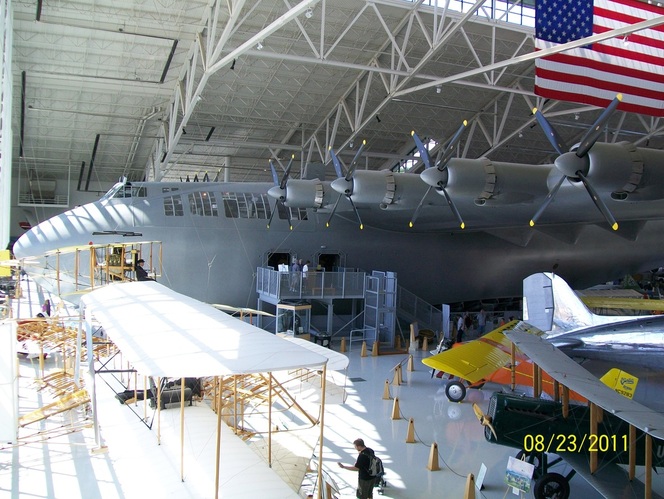 The "Spruce Goose" left forward taken from the second floor of the museum. The aircraft is made almost entirely of wood, although only a small portion is actually Spruce. Nearly all the wood is laminated in multiple layers. 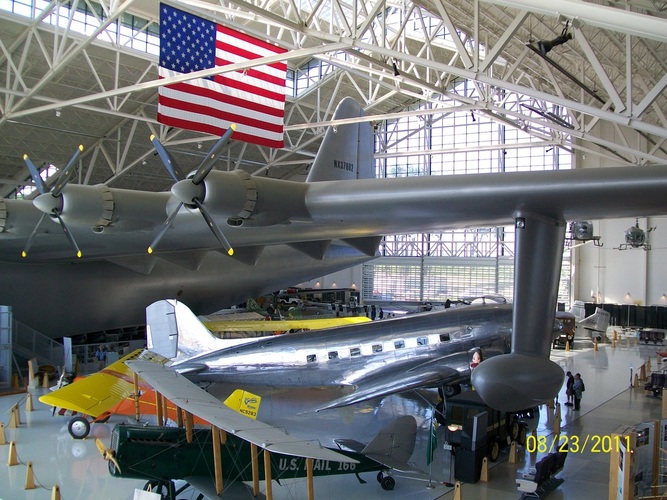 Note the DC-3 beneath the wing of the "Spruce Goose". 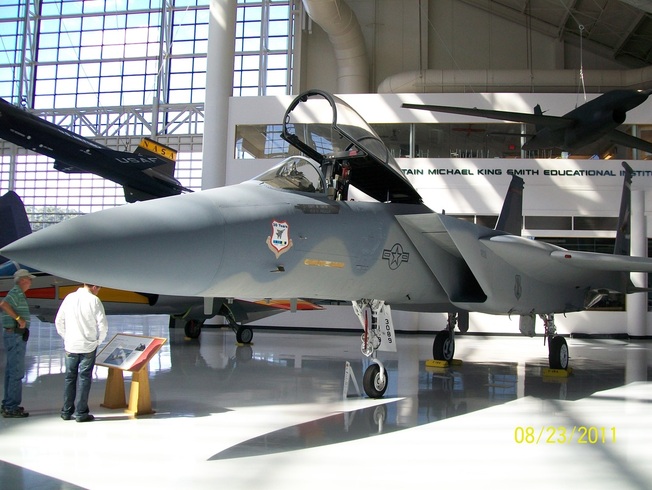 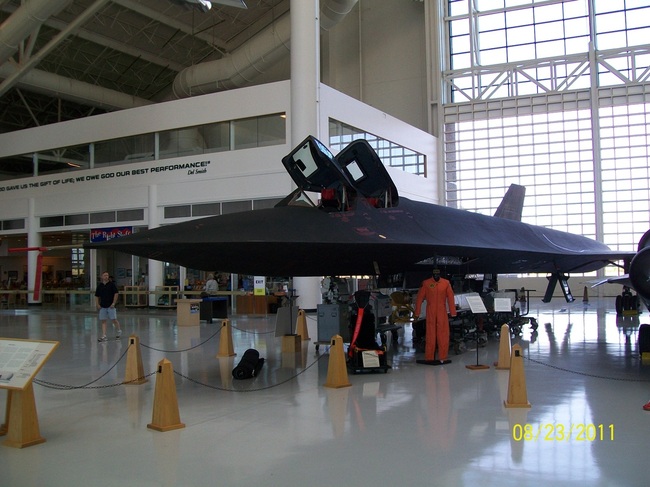 It seems every major museum now has an SR-71. The Evergreen SR-71 has a "start cart" and several camera and sensor panels on display. 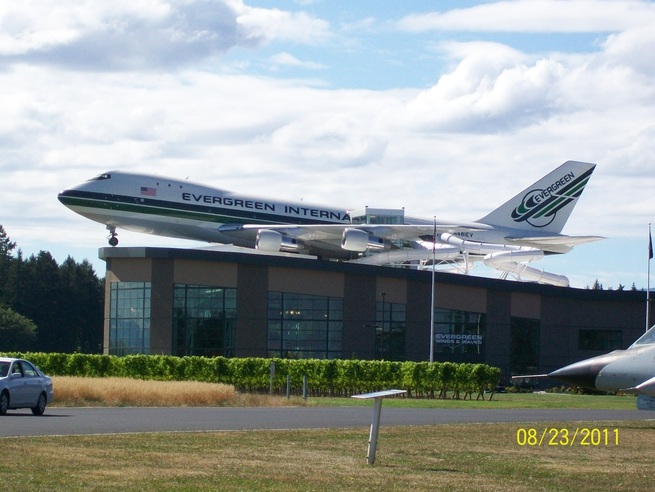 Evergreen recently opened a year round water park which includes a retired 747 Freighter sitting on the roof of the water park. Note the water slides exiting the 747 fuselage winding down into the building.